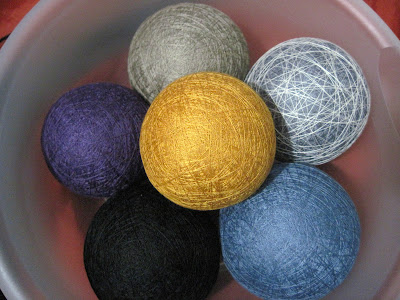 A bowl of six prepped mari — ready for stitching. For each I have a design in mind; and each already has a bell box inside with a quote or haiku. The next step is to map the division lines, which is done with just a paper strip and some pins (though I often use a fabric tape measure for more complicated divisions). Then the division lines are wrapped and tacked in metallic thread (or sometimes cotton perle, or sometimes regular thread that is removed once the pattern is stitched). I'll post about the process soon in the next installment of "anatomy of a temari."

The mari at top right is an experiment; the haiku inside starts "snow is upon snow," and I wanted to find a way to evoke the look of new-fallen snow. I wrapped the mari first with gray thread, and once that was complete, added some wraps of ecru thread — enough to stand out, but not so much that plenty of gray doesn't show through.
Posted by kumo temari at 9:10 PM

Every Kumo temari includes a quote, poem, haiku, or lyric embedded in the core, and every temari is one of a kind.

temari: Handmade thread-wrapped & embroidered spheres that were originally created as toys for children (and adults). They originated in China, and were later brought to Japan — possibly by Buddhist monks. Over time temari have evolved into a highly-prized exquisite form of folk art.

kumo: Japanese for cloud — 雲; kumo is also a homonym for spider.

do you sell temari?

All sales loan funds to low-income entrepreneurs around the world through the micro-financing site Kiva.org. 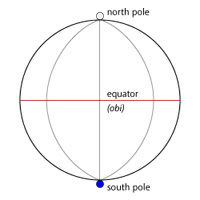 The temari is traditionally referred to in terms relating to the globe. Thus, the top and bottom are poles (north and south), and the horizontal circumference around the center is the equator (marked in red; it's called the obi, which is the sash around a kimono). The vertical gray lines represent the division lines that are marked with thread on the temari before stitching. This is a "simple 8" division (S8), resulting in eight equal "wedges," as if slicing an apple from top to bottom (wedges is not an official term, but it gets the idea across). Divisions include simple (S) and combination (C) — S4, S6, S8, S10, S12, and S16; C6, C8, and C10.

Here's the link for my Etsy shop's RSS feed, so you can follow the addition of new temari for sale: http://www.etsy.com/shop/KumoTemari/rss